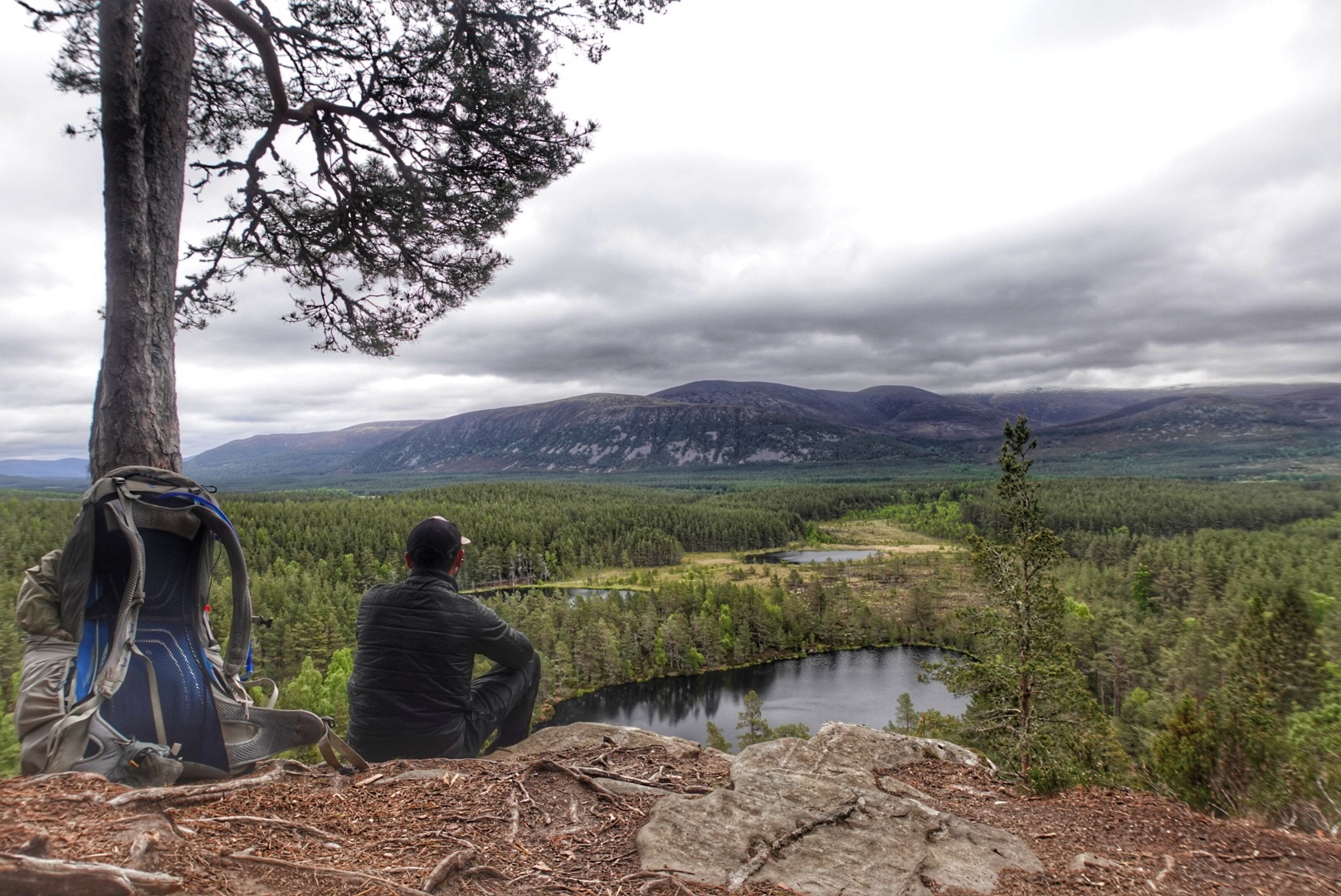 Another fairly easy day through beautiful countryside, rolling hills and small lochs.
I follow the River Spey for a while, a river I will follow after I finish the SNT, on the Speyside Way.
This trail follows the river to the coast and goes from distillery to distillery.
You can’t go wrong with that.

I stop at a café in a small village for a drink and the owner tells me that I am the first person he has seen doing the SNT this year.
Come to think of it, since I’m now going to Sobo, which would be against the grain, I haven’t seen another hiker doing it.
So I guess it’s not that popular of a trail after all…

I am now entering the Cairngorms, where I should have some snow, but nothing yet.

Drive through beautiful forest in the morning which is a nice change from the exposed/arid landscape of the Cape Wrath trail.

I see a summit covered in fresh snow, but it’s not (yet?) as bad as I thought.
Then it changes drastically in the afternoon and it looks a lot like what I imagine Mongolia looks like.
More trees and a desolate but beautiful landscape.

It seems the closer I get to summer, the colder it gets…
It’s really cold today, although I don’t really mind.
Cold, you can repair with material.
Unlike heat, wind or rain.
And the rain hasn’t been that bad so far to be honest.
I came out of the Cairngorms without being snowed in after all.

A pretty boring day.
There’s no getting around this on a long distance hike, some days are just… meh…
I walk along a river all morning before arriving at Blair Atholl in the afternoon.

There is finally a beautiful forest before reaching Pitlochry, a pretty little town that seems to welcome wealthy tourists.
Having problems with my French SIM card, I need to stop at a bar/restaurant and use the internet for a while.
But it’s already late and I still need to find a campsite outside the city, so I’ll do that tomorrow morning in the next town.

There is a forest just past the town, but there is a bit of a climb before I can find a spot.
Somehow the big climbs always seem to happen when you’ve filled your water…

I start the day with a beautiful forest en route to Aberfeldy.
Just before the city, there is the Dewar’s distillery, the first on the track!
It’s 10:30 a.m., but when in Rome…
I treat myself to a beautiful 25-year-old single malt and it’s incredible.
To be honest, I don’t know much about whiskey and I just drink it once in a while, even though I really like it.
I thought there wouldn’t be many distilleries on the SNT and this is probably the only one as I only have 3 days to go.

That’s why I also planned to do the Speyside Way, where there’s a ton of it.
I was thinking of doing it as a detour on the SNT, but I will do it in a few weeks, for logistical reasons and also it will be cool that this is the last trail I hike in Scotland before leaving.

After the distillery, I stop in town and have lunch in a pub so I can charge my electronics and do some internet.
The curry is horrible, but that’s okay, I still roll on that whisky.

I don’t know why (especially after a 4 hour break in town), but I feel pretty tired and sore today.
I think to stop early, but heavy hail, heavy rain and lack of camping decide otherwise.

Another pretty easy day, other than a horrible section of the classic untracked mound/swamp combo.
And uphill.
It’s absolutely exhausting and after an hour and a half, I see on the map that I barely walked a kilometer!
Luckily the rest of the day is easier and probably one of the hottest days I’ve had so far and with just light showers.

I get a little carried away in the evening when I find myself walking on a very long dirt road with no possible camping spot.
At 9:30 p.m., I finally find a flat place that will do just fine.

For the first time, I wake up and it’s not cold. It’s even warm enough, which makes a huge difference in the motivation to get out of the sleeping bag.
These are mostly roads and forest paths today, but it is still quite present.

I pass through Callander where I plan to hitchhike to Doune Castle, 20km away.
I’m a huge Monty Python fan and this is Monty Python’s Castle and the Holy Grail (aka one of the greatest comedies ever made)
Although I’ve been there before, it’s a cool place and I wouldn’t mind going back.
But it’s been a while since the last shower/laundry, so I decide to continue on to Aberfoyle, where I have far too much food for lunch.

In the evening I reach Drymen, where I will indeed return tomorrow.
My end point tomorrow will be Milngavie, where I turned around to hike with Gil and Peter. It is also the southern terminus of the West Highland Way, a trail I had planned to do with others after the SNT.
So I’m going to turn around and hike this trail.
In fact, the first 20 km coincides with the SNT, so I’m just going to hitch a ride at Drymen rather than doing the same section twice on the same day.
More than 16 km to go!

It’s pretty easy this morning.
I pass in front of the Glengoyne distillery. Peter recommended it to me but I had no idea it was actually right on the trail.
What a treat for my last day!
It’s 9:30 so I have to wait half an hour for it to open.
They have some crazy expensive bottles in there. One costs £3500…
After calling my banker, I decide to buy another one and buy myself a 20cl bottle.

As I now walk against the grain on the West Highland Way, which is one of the most popular footpaths in the UK, I see a walker almost every minute which is a little odd after not having one haven’t seen that much for a while. .

I arrive in Milngavie where I take a few sips of this delicious whiskey, a pizza and a beer, and try to embrace the fact that I have completed my 10th long distance run.
Although to be honest it’s not really the end as I still have a month of going on shorter trails.
Start now and turn around to travel the West Highland Way.

This website contains affiliate links, which means The Trek may receive a percentage of any product or service you purchase using the links in articles or advertisements. The buyer pays the same price as they otherwise would, and your purchase helps support The Trek’s ongoing goal of providing you with quality hiking advice and information. Thanks for your help!

2022-06-08
Previous Post: I would like to thank the Scottish people but Ukraine is in a fighting mood
Next Post: New setback for Scottish National Gallery project