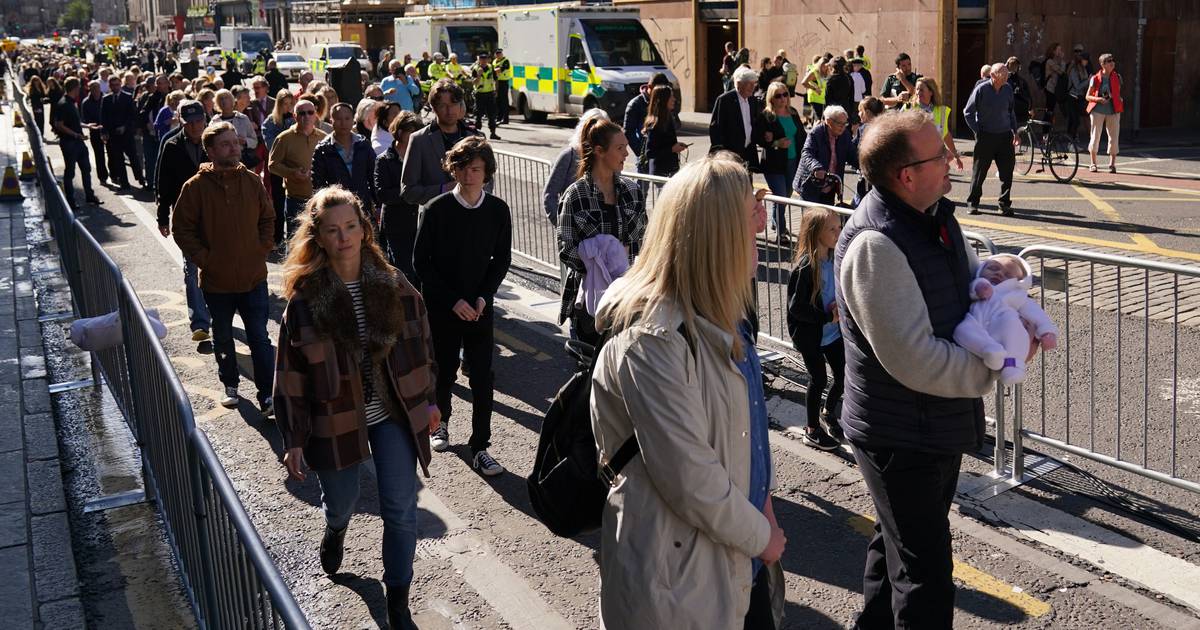 ‘It helps the union’ – The Irish Times

“It was very emotional,” said Joss Lucas. “We felt very privileged that the Queen was here, and we could actually be here to see her. It’s historic.

Her friend Sharon Duncan agreed. “It was lovely, so quiet and peaceful.”

The couple were among thousands who passed Queen Elizabeth’s coffin as it lay in St Giles Cathedral on Edinburgh’s Royal Mile, where more than 26,000 people paid their respects on Monday and Tuesday.

Some stayed six hours for the chance to do so; others, like Lucas and Duncan, were lucky, timing their arrival early in the morning when there was “no queuing – we were just walking straight.”

Inside the cathedral, the royal coffin sat on a draped catafalque of the Royal Standard for Scotland, with the Crown of Scotland at its head.

“He was right there, sitting on the casket,” Liz Provan said. “The next time we see this, it will be in a case. It touched me more than anything.

“I just stood up and looked at him and thought, this is the last time we’re going to see him around her. I’m no royalist, but I love the queen, mate.

Although the Royal Mile was quiet early in the morning – at times it felt like there were more yellow-jacketed police and security personnel than members of the public – many lingered near the cathedral after its departure, and some affixed bouquets of flowers on the security barriers.

There was a brief flurry of excitement as members of the Royal Company of Archers – who act as the monarch’s bodyguard in Scotland – relieved their colleagues inside the cathedral, eagle feathers in their caps and the long bows they wear catching the attention of those watching.

“They’re great, aren’t they, with bows and arrows,” Duncan said. “I’m so glad she died in Scotland – to think it would all have been in London otherwise. It helps the union. Scotland looked good in the cover.

This point has been raised by others; the feeling was that the Queen’s death in Scotland gave the country the opportunity to put its best foot forward and, in recent days at least, it has been pro-union rather than pro-independence voices that have spoken most strong .

Originally from Sri Lanka but now living in Scotland, Ranjan De Silva remembers being taken to see the Queen as a child and felt privileged to be able to see her coffin in Edinburgh.

“I have absolute respect for her – she has done a tremendous service to the country, the world and the Commonwealth, and her legacy is everything. I think people realize, in fact, that the unity of these four country [in the United Kingdom] is all…why would we need independence? »

As the hours ticked away until the Queen of Scotland’s final departure on Tuesday evening, others in Edinburgh were already looking ahead.

At the University of Edinburgh, it’s ‘welcome week’, and freshmen – and the parents dropping them off – found themselves in the middle of royal ceremonies.

While they – and local residents – have complained about road closures that have made it difficult to get to work or school – “it messed up the buses, I had a 20 minute diversion to get to work” – there is also “surprise” at the “respect” shown for the Queen.

“I thought the Scots would be, ‘oh, the monarchy, it’s an English thing’, but there was none of that,” one student said.

It remains to be seen whether Scotland’s central place in the ceremonies marking the Queen’s death will have any lasting impact – particularly on the issue of Scottish independence – as will the monarchy’s relationship with the country under King Charles III.

“The number of people going to see the body shows how pro-royal and conservative Edinburgh is,” said Paul Darroch. “It would be different in Glasgow, which is a poorer city. That doesn’t give me much hope for [securing] independence.”

“I understand that she was a mother and a grandmother and it’s sad,” says Angela Gutierrez, “but that doesn’t take away all the bad things [about the monarchy]. Nothing will change. She was a massive figure for the country and the world, but you can’t forget Britain’s past of empire and colonialism.