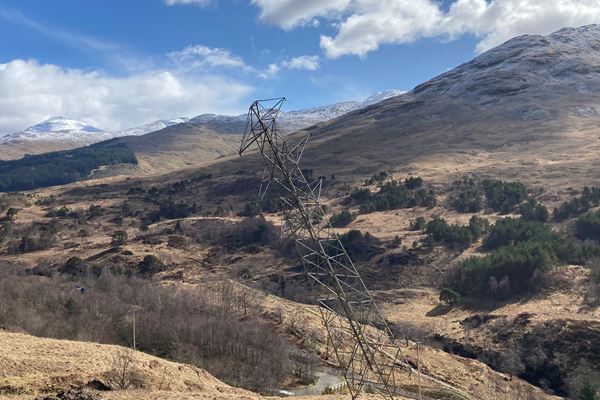 Picturesque Glen Falloch is located within Loch Lomond and The Trossachs National Park, and the removal of the 13 transmission towers originally installed in the 1950s reduces the visual impact in the area.

The towers have been knocked down for SSEN Transmission’s third project under the GB-wide Visual Impact of Scottish Transmission Assets scheme, known as Vista.

The pylons of Glen Falloch, located south of Crianlarich, are replaced by new sections of underground cables with a total length of almost 4.5 km. The cables have already been successfully energized to ensure continued power supply during the project.

The new underground cable route will replace the overhead line that crosses the glen and crosses the A82 trunk road and the West Highland railway line. The cable was installed using both surface drilling and Horizontal Directional Drilling (HDD) methods, to minimize any disturbance.

The project is the third Vista project to be carried out by SSEN Transmission to reduce the impact of its existing historic electricity transmission infrastructure in some of Scotland‘s most treasured landscapes. It is part of a Britain-wide scheme from energy regulator Ofgem, where Transmission Network Operators (TNOs) can apply for funding to remove infrastructure in national parks or scenic areas (NSA).

SSEN Transmission crews are currently in the final stages of another Vista project at Sloy near Inveruglas on the shores of Loch Lomond, where 12 towers have been removed and 6.6km of cable buried to improve the visual impact of the electrical infrastructure in the area.

A fourth Vista project is in its infancy in Killin which will cover 7.8km of cable and remove 31 towers in some of the most scenic areas surrounding the village, including where the line crosses the beauty spot of the Dochart Falls and the A827 road. .

Project Manager Alistair McDonald said: “This is a major milestone and a really exciting stage in the Glen Falloch Vista project, where we will really see a difference in visual impact with the towers removed from the landscape. national park scenic.

“Glen Falloch’s electrical infrastructure was originally installed in the 1950s, and thanks to funding from Ofgem, we are able to remove this infrastructure and put it underground with cables, helping to improve their visual impact in the region.

“Powering up the new underground circuit meant we were able to maintain the electricity supply seamlessly while we worked to remove the remaining towers, which involved a team working to safely dismantle the towers one by one.

“The project at Sloy continues to make great progress, with reintegration work in the final stages before the project is fully completed this summer.

Crews will now work to remove the remaining foundations of the tower in Glen Falloch before beginning work to re-establish access routes in the area.

You have a story? Email [email protected]

2022-05-03
Previous Post: Remember Thursday it is the people of Scotland who are sovereign
Next Post: Scottish National Investment Bank gives £3m to travel tech company