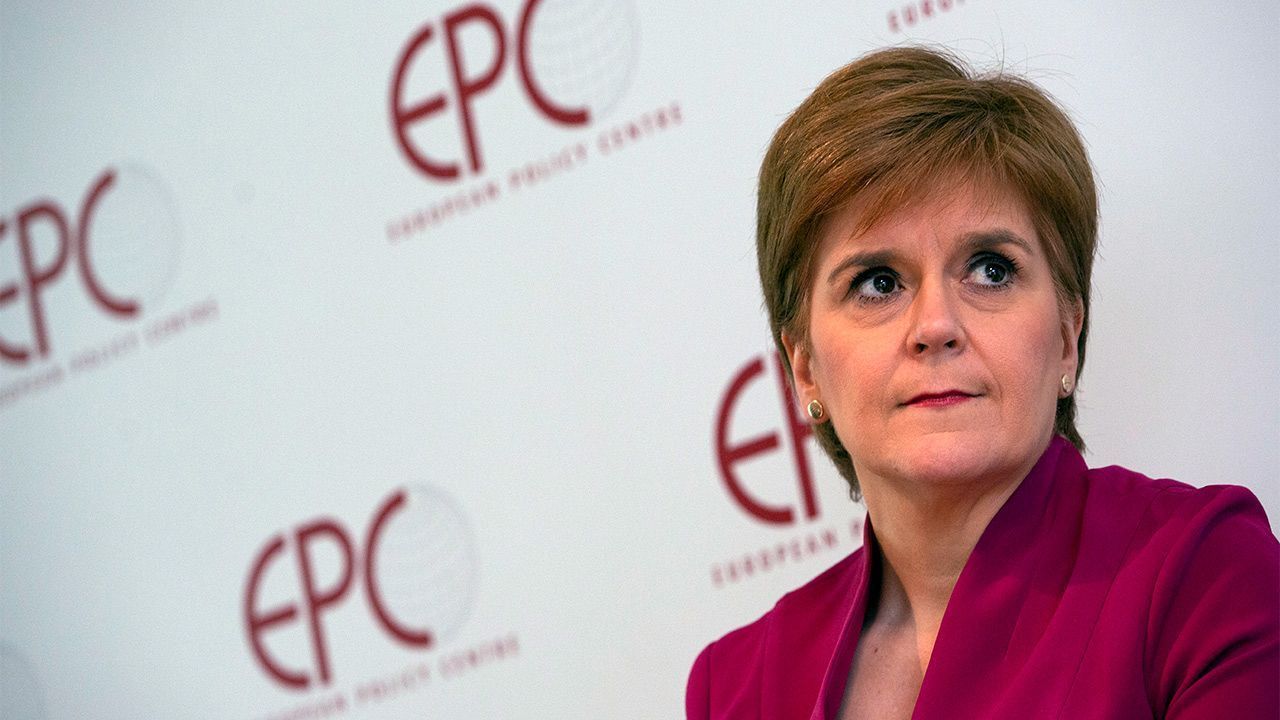 Scottish First Minister Nicola Sturgeon has published a bill for a second referendum on Scottish independence. It specifies October 19, 2023 as the polling date, defines the question to be asked, “Should Scotland be an independent country?”, and specifies who can vote.

Since the power to legally call a referendum rests with the Conservative government in Westminster, which has ruled out doing so, Sturgeon has asked for a Supreme Court ruling on whether the Scottish government can act unilaterally.

She told the Scottish parliament in Holyrood on Tuesday that a defeat would prove: ‘No matter how Scotland votes, no matter what future we want for our country, the UK government can block and cancel. The UK government will always have the final say. This would mean, Sturgeon continued, “if the law says it is not possible, the general election [due 2024] will be a “de facto” referendum.

Sturgeon and the Scottish National Party (SNP) are orchestrating a reactionary coup on behalf of part of the bourgeoisie in Scotland.

Particularly under the brutal and crude rule of Boris Johnson, there has undoubtedly been an increase in support for the independence of the Westminster government. Scotland’s last independence referendum in 2014 resulted in a 55-45% ‘no’ vote. According to the latest Ipsos Mori poll, 51% are in favor.

But such polls only underscore the deeply divisive nature of an effort to make Scottish nationalism the dominant issue on both sides of the border.

As the working class across the UK enters into struggle against the Johnson government and amid NATO’s war on Russia in Ukraine, the pro-austerity, pro-war SNP advances a nationalist policy of dividing for to reign.

There is no progressive content in the call for Scottish independence. No one has ever seriously attempted to explain how workers in Scotland are specifically oppressed in relation to workers in England by British imperialism. The strongest argument is that Scotland is forced to accept governments and policies that it does not choose. But not voting for Johnson or his predecessors is something much of Scotland’s working class shares with their counterparts in England and Wales.

Moreover, the main concern of the SNP is the maintenance of Scotland in the European Union, not as a democratic question but from the point of view of the economic interests of the Scottish bourgeoisie and a privileged layer of the middle class. superior. Speaking to Sky News this week, Sturgeon referred to Scotland voting 65-35 per cent against Brexit and said: ‘At the time [2014]Scotland learned that we would lose our membership of the European Union if we voted for independence and now we are out of the European Union because we did not become independent – this happened against our will.

The surprise Brexit campaign victory of the more right-wing elements of the Conservative Party in the 2016 referendum, driven by fantasies of a global revival of British imperialism through Thatcherite deregulation, a deepening alliance with the American imperialism and freedom to strike the global trade relationship – undoubtedly acted as a spur to social reaction, trade and military warfare. But it was only an expression of the deepening of the inter-imperialist and national antagonisms which today have reached such malignant and murderous dimensions.

The SNP’s anti-Brexit stance in 2014 was in fact shared by most of the British bourgeoisie, whose agenda was to continue the trade war inside the EU, not outside it, and to wage a war campaign as Washington’s mouthpiece in Europe. to control the independent global ambitions of Germany and France.

As proven by the savage austerity measures and attacks on democratic rights across the continent, as well as the all-powerful EU composition behind the US-NATO war with Russia , the two alternatives to the referendum on EU membership were then and still are hostile to the fundamental interests of the working class.

A Scotland liberated from Westminster would be “independent” in name only. Home to just five and a half million people, it would be even more ruthlessly subordinated to international finance capital than it already is, with the SNP tasked with enacting tax and spending cuts and scrapping regulations to make the region attractive for investment.

The SNP wants to become a member of the EU again while preserving access to the British market. But the threat of the collapse of the Northern Ireland Protocol amid an explosion of sectarian tensions is a warning of the political realities that national divisions create.

Economically, such a policy would facilitate a fierce race to the bottom between Scotland and the UK, with attacks on workers like those already foreseen in the SNP’s spending review until 2027. According to the ‘Institute of Fiscal Studies, “the ax is being thrown across a wide range of public service areas. These include a sharp cut of 8% in real terms over the next four years for local government, universities, prisons and rural affairs. According to the Unison union, this will equate to around 40,000 job losses, as the public workforce is reduced to pre-pandemic levels. Cuts on this scale made in England and Wales would amount to 480,000 jobs – a prospect Johnson would happily embrace.

Public bodies must find annual “efficiencies” of 3%. Even before the spending review, National Health Service workers were being offered a pay rise well below inflation of 5% and local government workers a very low 2%.

An independent Scotland would also remain a loyal member of the imperialist war camp. Sturgeon commented in May in reference to the war in Ukraine: “I am even more convinced today that, coupled with a strong relationship with the United Kingdom, membership of the European Union and NATO will be the cornerstones of an independent Scottish security policy. .”

Sturgeon further offers her threadbare status as a politician seeking “national self-determination” to portray NATO’s imperialist war aims in Ukraine in a similar light, stating in reference to the war: “At bottom, the independence movement Scottish is an internationalist project.”

Residual SNP opposition to the Trident nuclear submarines based at Faslane Naval Base near Glasgow would, like previous opposition to NATO, be quickly dropped. Stewart McDonald, the SNP’s defense spokesman, told the BBC about NATO: “We would go along on terms similar to Norway or Denmark in that we don’t want to permanently host nuclear weapons from other states, but we would certainly take our commitments as members of the alliance seriously.

The key word in the McDonald’s statement is “permanently”. Phillips O’Brien, professor of strategic studies at Andrews University, told the Daily Express“If he defined anti-nuclear as ‘at no time will nuclear weapons be permitted on a navy ship in Scottish waters’ that would probably make Scotland ineligible for NATO, but I don’t think not that they define it that rigidly”.

Former SNP defense spokesman and British Army Lieutenant-Colonel, now a Liberal Democrat, Stuart Crawford suggested in the same article that the nuclear naval base “could be the biggest currency of exchange that Scotland might have in possible future independence negotiations”.

Workers in an independent Scotland would face the same political challenges as they do today, but do so while cut off from their class allies in the rest of the UK.

A politically criminal role is played by the pseudo-left in providing left-wing cover for the SNP and its intrigues for a Scottish capitalist state.

Writing for the Scottish Socialist Party in pro-independence National, Ritchie Venton argued, “the subordinate relationship with Westminster and the financial straitjacket under devolution means that – like the Tories – the SNP/Green government is enforcing the same wage moderation”. Freed from such bondage, he hinted, the SNP could honor a “people’s mandate to challenge and defeat Conservative cuts to wages, jobs and services”.

The Socialist Party of Scotland, affiliated with the Committee for a Workers’ International, said in its statement in response to Sturgeon’s announcement: “We stand for a united struggle of the working class in Scotland, England and Wales against the Johnson government and for a socialist alternative”, before adding: “This is why the Socialist Party Scotland fights for an independent socialist Scotland”.

Hitting the slogan ‘an independent socialist Scotland’ on the SNP’s push for a referendum doesn’t make independence any more progressive than calling for a ‘leftist exit’ did for Brexit – the politics of his socialist party brother in 2016.

So does adding the call for “a voluntary socialist confederation with England, Wales and Ireland as part of the struggle for socialism internationally”. No explanation is ever offered as to why encouraging national divisions here and now facilitates a future struggle for socialism, whether in the UK or internationally. The SSP, SPS and others have long dismissed any prospect of a unified working class struggle, let alone a program of social revolution – routinely calling working people in England politically backward and advocating the creation of a Scottish state. as a supposedly more responsible vehicle. for enacting various limited social reforms.

The struggle for socialism requires a common struggle of the British, European and international working class.

As the Socialist Equality Party wrote before the 2014 referendum: “The unity and independence of the working class is the standard against which every political party and every political initiative must be judged. This is essential in conditions where the planet is stained with nationalist poison.

“Separatism,” explained the PES, “only weakens and divides the working class” in its struggle against capitalism. Moreover, “if national identity trumps class unity in Britain, then it trumps everywhere. This means that the false left is the supporters of the creation of countless mini-states based on ethnicity, language or religion”, the balkanization of the world.

In their struggle against the austerity and war policies of British imperialism, working people across Britain must fight for the overthrow of the Johnson and Sturgeon governments and the building of a socialist Britain within the United Socialist States of Europe and the World.