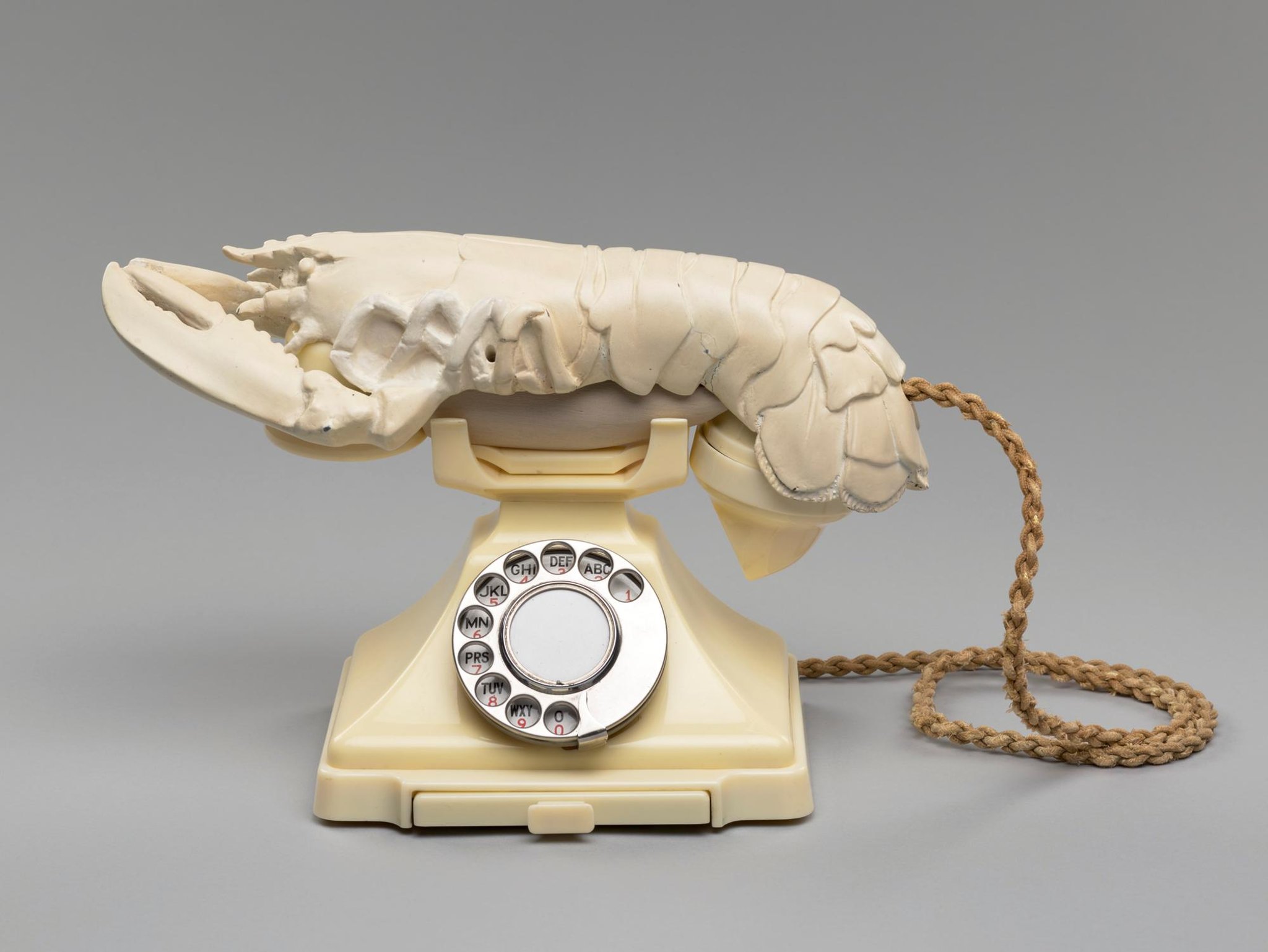 By: Juanita J. Ross
In: Scottish national
Lobster Telephone, by Salvador Dalí and Edward James PIC: National Galleries of Scotland, purchased by the Henry and Sula Walton Fund, with assistance from Art Fund.

The National Galleries of Scotland buying fund would likely not cover the buyer’s premium when auctioning a work of art of modest size. Nonetheless, the entire ground floor of the Scottish National Gallery of Modern Art (Modern One) has been devoted to New Arrivals, works acquired for the Modern Collection by one means or another over the past decade or so. The Museum has certain funds which it can call upon. The Art Fund also benefited from the aid, but most of the acquisitions are now gifts, bequests or substitutes, although even here it is not always clear. A massive donation of works by Elisabeth Frink is described as “provided to the National Galleries” at the will of the artist’s son. “Presented” is the usual word, but no gloss is offered.

The range of work is very wide if you are nice, rough if not. But what should be the balance between the national and the international, or between the historical and the contemporary? After all, even “modern” no longer means what it did when the gallery was first proposed by Stanley Cursiter in the 1930s. The Museum has to juggle these competing demands, not always successfully.

Bachelorette, by France-Lise McGurn (born 1983) PIC: National Galleries of Scotland, purchased in 2020. Funded with a donation from Denise Coates CBE. Image courtesy of the artist and the Simon Lee Gallery. Photo: Ben Westoby

Dated 1912, The Bottle and Glass on a Table by Picasso is, for example, a historically important acquisition. It was in 1912 that Picasso began to make collage. This is a piece of newspaper pasted on a charcoal drawing. It is not a major work, but it represents a founding moment in the history of modernism and therefore constitutes a good marker in the brief rather vague chronology of the gallery. The arches by Frances Macdonald MacNair date from roughly the same date. The knots were considered definitively feminine and here a female figure is adorned by dozens. She apparently sleeps and is quite naked, but is framed by a wide skirt and veil that form an almond-shaped mandorla, an age-old symbol of a woman’s sex: asleep in all the buttons and knots that define the gender and sex challenge of Edwardian Costume, there is a woman ready to wake up. A few years later, the women did indeed rebel and shed their heavy and restrictive clothing.

Other historical acquisitions include two important surrealist works, the Portrait of Max Ernst by Leonora Carrington and the Living Painting by Dorothea Tanning. The first painting is an extraordinary painting of Ernst in an arctic landscape, wearing a fur dress with a tail and striped socks. The latter shows a naked girl kissed by a big hairy dog. Both women were involved with Ernst. Tanning married him later and there is also a work by him, The Legend of the Centuries, a tiny wooden chair on an enormous frame of stone megaliths. There is also a pretty nice Chagall fire. These are all useful additions to SNGMA’s wonderful surreal collection and the key acquisition here is of course Dalî’s Lobster Phone, the perfect icon of surreal absurdity. Dorothea Tanning’s Primitive Seating, an animal print armchair with a tail, is in the same vein.

Indeed, many of the new acquisitions are made by women. Gwen John’s Portrait of a Girl in Gray, for example, is a great purchase made possible by a bequest from Henry and Sula Walton. Solemn and beautifully austere in shades of gray, it makes a nice counterpoint to Frances Macdonald MacNair’s Bows. Oddly enough, Gwen John’s painting is under an Immigration and Emigration section where her companions include Oskar Kokoschka’s Portrait of Posy Croft and several works by Marie-Louise von Motesiczky. Both artists were refugees. Jankel Adler also came with the Polish army. The archival documents on display include letters relating to the sad failure of his naturalization attempt. It’s an all too familiar story, but still shocking. Adler’s impact in Glasgow is reflected in a pastiche of Picasso by Benjamin Creme, also the son of immigrants.

If you must have a Damien Hirst, the Wretched War Bronze is better than some, but works by Jenny Saville, Steven Campbell, Glen Onwin, and Peter Doig are welcome acquisitions. A wrong is also being repaired in the acquisition of important works by three veteran Scottish female artists, none of which was correctly represented before. These are the magnificent Summer Day in the Dunes by Frances Walker, a large painting by Tiree, Barbara Rae’s Light at Jacobshavn, a very fine example of her arctic paintings, and the Large Tree Group by Victoria Crowe, an icon of her Shepherd’s Life series that really captured the popular imagination. These three works are hung with For a Lady Remembered by the late James Morrison under the title Scotland and the Landscape. If these acquisitions correct a historic wrong, I hope it will not be done reluctantly. Four and a half introductory lines suggest that the Conservatives did not know what to say. Other works related to the life of Crowe’s great shepherd were acquired at the same time. Frances Walker also donated a very nice group of prints with the purchase of her painting. Only two of them are on display, hung in the hallway.

These three women artists are at the heart of any narrative of contemporary Scottish art. Surely if the gallery were sincere in making amends for their negligence, a proper exhibition could have been made of their work? But no, the next room is entirely devoted to prints by Ciara Phillips. They’re nice enough, just not comparable, and revealingly the labels are laconic on the three women, but the Conservatives have a lot to say about Philips. There is a floor-to-ceiling text panel and a scale plan. In contrast, for Walker’s work, the curators are so short on things to say that all three labels are repeating the word “sorry” each, which is wholly inappropriate to describe the images on display anyway.

And then there is Elisabeth Frink. The largest gallery is dedicated to him. She was not the greatest sculptor of her generation and, as far as I know, had nothing to do with Scotland. His spiky bronze birds are largely from the 1950s, but his huge male heads, some with sunglasses on, look like Pixar villains. It is difficult to understand why our National Gallery, so cramped for space, has taken on this burden. It was perhaps thought that this acquisition could complete the Paolozzi collection of the Museum. If so, it doesn’t flatter him.

The work I spent the most time in front of was Graham Fagen’s The Slave’s Lament. Presented on four screens, it is a staging of Burns’ poem in which a slave remembers “Sweet Senegal”, the house from which he was brutally torn. The song is sung with lovely melancholy by reggae singer Ghetto Priest accompanied by strings from the Scottish Ensemble. Ghetto Priest is a spectacularly flamboyant presence, variously adorned with the colors of Senegal. Even his microphone is decorated with pearls. He is a powerful figure of fierce energy. In contrast, decent string players suggest the restraint of polished salons. The atmosphere of deep and melancholy reflection invites contemplation of all the complexities of this dark heritage. Far from the delusions about the stone statues, this is by far the most revealing comment I have seen on this subject.

For a Lady Remembered, by James Morrison PIC: National Galleries of Scotland, presented by the artist’s family, 2021 © James Morrison