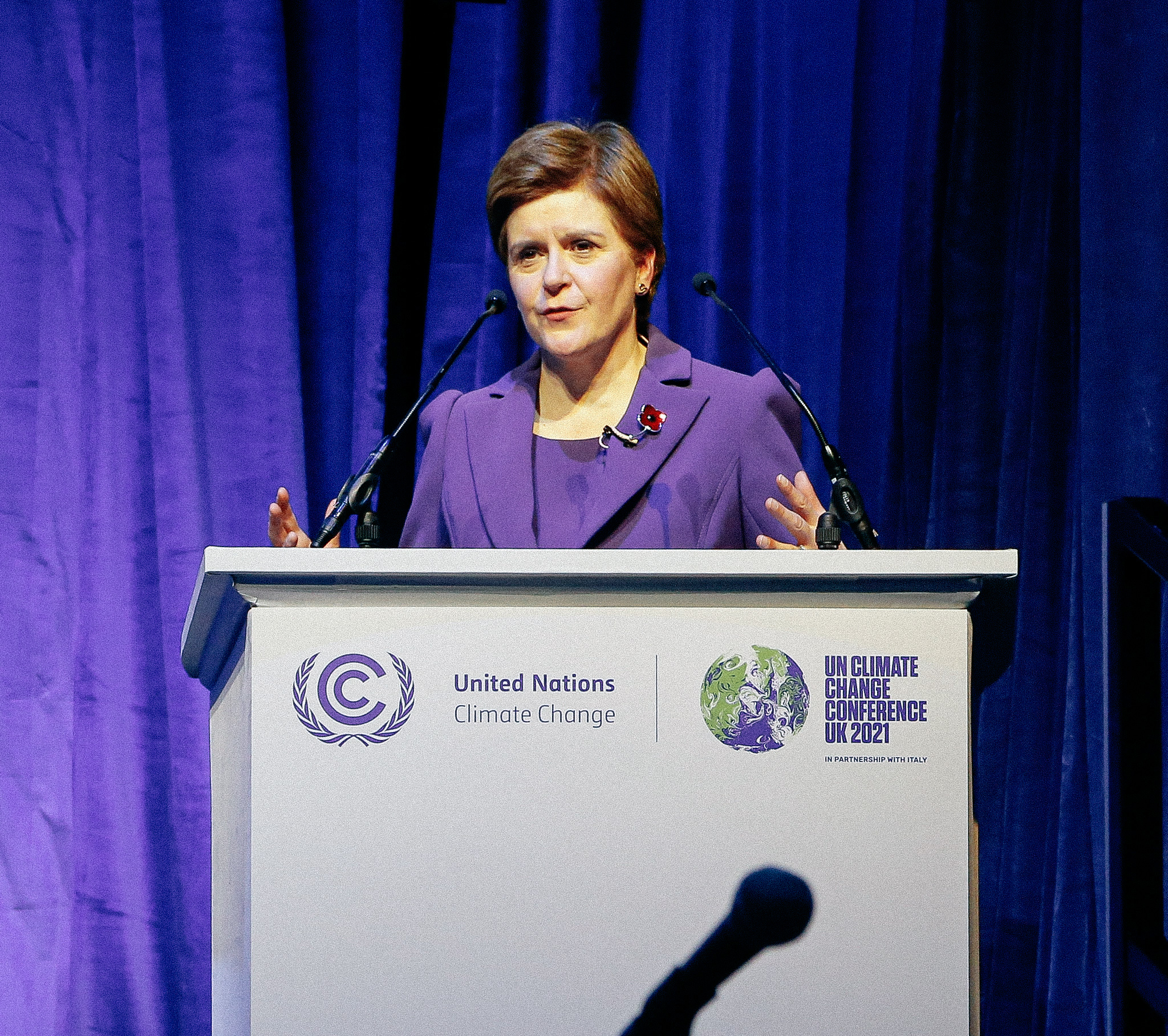 Prime Minister Nicola Sturgeon made a statement to the Scottish Parliament on the outcome of COP26 in Glasgow and how Scotland will continue to play its full role in tackling climate change.

Read the full statement below.

President, on Saturday, the COP26 ended with the approval by 197 countries of the Glasgow Climate Pact.

Today I will report on the Scottish Government‘s activities during the COP and offer our preliminary take on the deal.

First of all, I would like to express my gratitude to everyone who made sure that the organization of the summit was a success.

Over 40,000 people have registered to attend – a higher number than any of the previous 25 COPs.

In addition, tens of thousands of activists have visited the city.

Some inconvenience was inevitable and I know the city has suffered some disruption.

But the warmth and enthusiasm of Glasgow’s hospitality has been praised by all the international visitors I have met.

So my first and sincere thank you goes to the people of Glasgow.

I would also like to thank the Scottish Events Campus, Glasgow City Council, all the volunteers and partners from the public and private sectors whose hard work made the event possible.

My thanks also go to the United Nations and in particular to the Executive Secretary of UN Climate Change, Patricia Espinosa.

UK COP President Alok Sharma also deserves huge credit. He and his team worked tirelessly to achieve the best possible result. I also thank them for keeping me informed throughout the negotiations.

Finally, peaceful protest is vital to any COP.

This keeps the pressure on negotiators and reminds those in the blue zone of the vital work they are there to do.

Over the two-week event, over 400 demonstrations were held in Glasgow.

That there were less than 100 arrests in total is a real credit to the protesters, but also to the Scottish police.

COP 26 was the largest policing operation ever undertaken in the UK and I pay tribute to the Chief Constable and all the officers, from forces across the UK, who have worked under his command, for the highly professional which it was conducted.

Over the past two weeks, the eyes of the world have been on Scotland and we have shown the best of our country to the world.

Of the roughly 500 meetings, events and other commitments made by ministers – including almost 100 that I have undertaken personally – many were with companies and potential investors in green innovation.

We also took the opportunity to strengthen our bilateral relations with a number of countries and regions of the world.

In addition to presenting the country, the Scottish government has also set clear targets for our participation in the COP itself.

First, we aimed to amplify the voices too rarely heard in these discussions – for example, those of young people, women and countries of the South – and to be a bridge between these groups and the decision makers.

To this end, we funded the Youth Conference when the UK government chose not to.

We have supported the Glasgow Climate Dialogues to provide a platform for the voices of developing and vulnerable countries.

And, in partnership with UN Women, we launched the Glasgow Women’s Leadership Declaration on Gender Equality and Climate Change.

I was joined for the launch by leaders from Bangladesh, Tanzania and Estonia, and the declaration has now been signed by more than 20 countries.

We also endorsed the UNICEF statement on children, youth and climate action.

Second, we have worked hard to ensure that cities, states, regions and decentralized governments play our part in progress.

Scotland is currently co-chair of the Under2 Coalition, which held its general assembly during the COP.

More than 200 state, regional and decentralized governments are now members of the Coalition.

Collectively, we represent nearly 2 billion people and half of the world’s GDP.

As the COP approaches, the Coalition launched a new MoU, committing members to achieving net zero by 2050 at the latest. 28 governments have already signed and we encourage others to do so.

Finally, more than 200 cities and states have now signed up to the Edinburgh Declaration on Biodiversity. This represents welcome progress in the run-up to the COP on biodiversity next year.

Our third goal was to use COP to challenge ourselves to go further and faster on our own journey to net zero.

This is why I chose – for my first engagement at the COP – to meet climate activists Vanessa Nakate and Greta Thunberg.

This is also why we have moved away from our previous commitment to maximum economic recovery of oil and gas and started discussions with the new Beyond Oil and Gas Alliance.

We have also published further details on our policy ambitions for onshore and offshore wind, and launched a new hydrogen strategy and a £ 55million nature restoration fund.

We have released a new planning framework focused on climate action.

And we marketed our green investment portfolio to a range of businesses and investors.

We also launched the Blue Carbon International Policy Challenge; supported international agreements on low carbon transport and reduction of agricultural emissions; and signed new memoranda of understanding on heat with Denmark and on peatlands with Chile. A full list of these initiatives will be published in SPICE later this week.

Of course, our most important goal was to use our commitment, influence and interaction to push for an international agreement to match the urgency of the climate emergency.

We wanted the $ 100 billion in funding promised by the Global North to developing countries 12 years ago to be delivered.

And we wanted the developed world to recognize its obligation to help developing countries pay for the loss and damage they are already suffering from the climate change they have done so little to cause.

The Glasgow Climate Pact represents progress on many of these issues, but it must be strengthened quickly if a climate catastrophe is to be avoided.

It is important that the need to cap temperature increases at 1.5 degrees is no longer in question.

However, the world is still on the way to a temperature rise of more than 2 degrees – a death sentence for many parts of the world. To keep 1.5 degrees within reach, global emissions must be almost halved by the end of this decade.

Thus, the demand for countries to return next year with significantly increased Nationally Determined Contributions is vital.

Finance is crucial to accelerate progress.

I welcome the goal of doubling adaptation funding by 2025 and the commitment to a longer-term funding target.

This COP also gave rise to major commitments on methane and deforestation. And for the first time – albeit in watered-down language in the final moments – a COP cover story agreed on the need to move away from fossil fuels.

As the COP approaches – and following what we heard at the Glasgow Climate Dialogues – the Scottish government has decided to champion the issue of loss and damage.

Two weeks ago, we became the first developed country in the world to commit to supporting countries that suffer loss and damage. I am delighted that our commitment has since been completed by Wallonia, and by a contribution from the Fondation du Fonds d’Investissement pour l’Enfance.

The final position agreed in Glasgow represents progress in recognizing the loss and damage that the climate crisis created by developed countries is already causing in developing countries – but it does not go far enough.

I particularly regret the decision of certain developed countries to block the establishment of a Glasgow financial facility on loss and damage.

Over the weekend, I met Dr Saleemul Huq, one of the leading activists on this issue. I pledged the Scottish government will continue to work with it and others to advocate for loss and damage ahead of COP27 in Egypt.

Loss and damage has been an example of Scotland’s leadership during this COP.

But at the end of the day, Scotland can only lead and speak with credibility if we meet our own net zero goals.

Looking back over the past two weeks, I am proud of the leadership Scotland has shown and for which it has been recognized.

However, I also feel a renewed sense of responsibility to move further and faster, to face difficult challenges as well as relatively easy options, and to help raise the bar of global leadership more generally.

That is why, in the months and years to come, we will resolutely focus on delivery.

This will be the most important decade in human history.

The actions we take by 2030 will determine whether or not we leave a sustainable and habitable planet to those who follow us.

The stakes couldn’t be higher – and so I understand why many are angry and frustrated that more progress hasn’t been made in Glasgow.

However, the Glasgow Climate Pact provides a basis for further action. The key test will be whether it is implemented fully and urgently.

This is where we all need to focus our efforts between now and COP27.

Scotland will continue to play its full role.

While we can be proud of the role we played at COP26, our responsibility now is to ensure that future generations look back and are proud of the actions we take in the months and years to come.